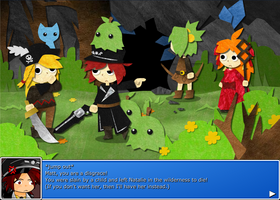 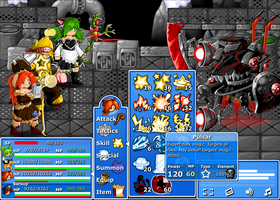 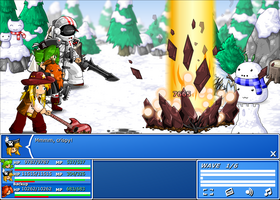 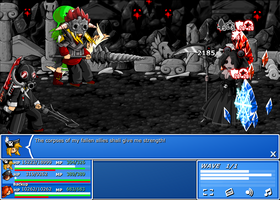 Hey guys, version 2 of Epic Battle Fantasy 4 is live!
To access it you'll have to download a new .zip file.
(and the old version will still be available for download too)

This update is long overdue, and many complaints that I've received over the years have been addressed here. The game is now powered by Adobe AIR (like EBF3 and EBF5), so on top of all of the improvements listed below, it should also have less compatibility problems.

Unfortunately, your old saves will not work at first - you'll need to manually move them to a new folder (the load screen has instructions on how to do this). Alternatively, you'll always have the option to keep playing the old version of the game until you are ready to update.

The game can run in Mac and Linux now, since the .swf game file has been separated from the .exe file.
Included in the new installation folder is a Flashplayer executable for each type of operating system - you can use these to open "Epic Battle Fantasy 4.swf". A couple of game options won't work on Mac and Linux, but the game content is exactly the same.

Here’s what has changed in this version…

• Replaced the saving system with EBF5’s: a new type of .meow file is used, and .sol files are no longer used (unless running as a .swf) but can still be loaded if you put them in the correct folder
• Added a confirmation prompt before overwriting save files
• Added the option to delete save files
• Added the backup save feature from EBF5 – you can now backup, name and share your save files
• Added the Zero difficulty option, which offers no challenge at all
• Added similar resolution and window options to what EBF5 has (up to 1080p, Best Fit mode, etc) (I personally played the game just fine in 1440p, but that requires a super fast PC)
• Added the option to delete all medals from the main menu
• Added the option to reset all stat boosting items if you want to apply them differently
• Added the ability to close most menus by right-clicking anywhere
• Added buttons to quickly select different players in battle
• Added buttons to quickly access the forge menu from the equips menu
• Disabling background animations also disables screen shaking now, which improves performance a lot
• The shop menu now allows you change quantities by 10 at a time
• Players now regain HP and MP outside of battle much faster than before
• A mini options menu has been added to the first screen of the game

Gameplay Tweaks:
• Added the Cheats and Challenges menu from EBF5, which includes:
• Cheats: reduce foe resistance, reduce foe HP, increase player SP, increase Limit Break charging, even EXP after battle, learn any skill, get first turn in every wave, trigger more automatic abilities, and scan foes automatically
• Challenges: increase foe resistance, increase foe HP, increase foe evade, increase foe attack, rare foods banned, foes attack first in each wave, foes do not respawn, revived players do not get a turn, and foe HP bars are hidden
(I recommend the foe resistance challenge, as many bosses will have different weaknesses, forcing you to try new strategies)
• As in EBF5, cheats temporarily disable Epic medals, and unlocking Epic medals with all challenges enabled will earn you a gold star
• Smoothed out the formula for enemy damage scaling over level 32 (no more sudden spike at final boss and Battle Mountain)
• Changed the summon power formula so that summon damage does not increase slower at level 33 and above
• Reduced player MP growth over level 20, to prevent nearly unlimited MP
• Foes drop much more AP towards the very end of the game, making it much easier to max out your skills
• Foes have up to 12% less HP from the Jungle and onwards to Newgame+ (again to speed up the pace)
• Party buffs, heals, and status effects now apply to the backup player too
• Buffed Sacrifice, Bubbles/Bubble Blast, Hyper Beam, Gaia Seed, Syphon, Debilitate, Dispel, and changed Dark Flare
• Soul Arrow no longer copies stats that are lower than yours
• Some unfair foe attacks have been nerfed (Flame wraiths only use death on hard mode now, etc)
• Tired status now increases Earth damage, instead of Stun status doing this

Graphic and Sound Improvements:
• Many low-quality sound effects have been replaced with sounds from EBF5, and some animations have totally new sounds
• Sound effects will no longer play multiple times at once, making many spells sound less painful, especially AOE spells
• Music and sounds are no longer forced into mono format
• Bitmaps (such as medal icons, limit breaks, etc) have been upscaled so they look better in high resolutions
• Updated the fan art gallery so the full images are included, instead of just thumbnails, and added a LOT of new art
• Wallpapers in the installation folder have been replaced with higher-resolution versions, and a World Map file has been added

Bug Fixes:
• Fixed the rough edges on text shadows – the UI looks a bit smoother now
• Fixed a major memory leak issue that slowed the game down during long sessions
• Fixed an exploit where you can use the summon power variable for other skills
• Fixed some typos in equips and skills, making some broken effects work correctly now (better Power Metal healing, etc)
• Fixed some broken foe behaviours and incorrect bestiary descriptions (Green Bush, Black Dragon, etc)
• Fixed some scaling issues in the Endless Battle mode (summoned foes are at wrong level, limit break charging effected by difficulty, etc)
• Fixed the alternative animations for Mighty Oak and Praetorian not being saved correctly once acquired

A light-hearted turn-based JRPG, inspired by classics. Battle through waves of enemies and save the world!

does this 12 dollar version have all dlcs?